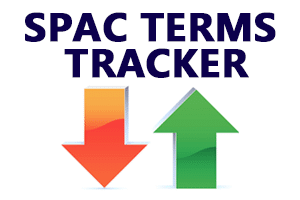 Investors are likely already aware of the SPAC market’s uncanny ability to change on a dime. And this year’s SPAC market was nothing short of dynamic as we had periods where most shares traded below $10 to be followed up by weeks with record setting IPOs shortly thereafter (both in number and size of the IPOs).

We also saw our first SPAC since 2013 go to market with just a share (no warrant or right included in the unit) back on July 8th (Therapeutics Acquisition Corp. – RACA), which was one of 11 warrant-less IPOs in 2020. Yet while some teams took advantage of looser terms, others still had to sweeten their unit to satiate investors’ appetites. Less than four days before Dragoneer II upsized its IPO without a warrant, Better World took a “golden sombrero” where it downsized, increased warrant coverage, and added to trust all in the same filing.

All this is to say what investors intuitively already know to be true: there is a clear bifurcation of terms among SPAC teams coming to market.  The higher profile, brand-name teams can IPO with relative ease, versus everyone else battling a tightening of terms in a crowded market. At a higher level, this has made the market a tough one to judge. It seems to have never been more difficult than it is right now to answer the question “How’s the SPAC market doing?”. At risk of oversimplifying one of the more nuanced corners of Wall Street, we have begun tracking weekly changes in SPAC S-1’s to gauge the market’s risk-appetite.

Specifically, the “tracker” follows every SPAC on file to IPO, from the first S-1 to the prospectus. At the end of every week, we tally each SPAC’s offering amount, warrants & rights in the unit, duration of the trust (in months), and the trust’s funding percentage.

We’ve been tracking week over week changes since October 23rd, where a downsize, more dilutive securities, additions to trust, and shortening duration are all negative changes. The reverse logic would indicate positive changes. Each week the output below shows the positive and negative changes, as well as the “no changes”.

Further, comparing data points week over week could show comparatively whether or not terms are loosening or tightening further. Last week’s reading of 50.7, for instance, showed terms were still loosening, though at a smaller clip than the high seen two weeks prior.

Perhaps this is stating the obvious, but the last three weeks have seen a significant loosening in terms. It was also the smallest number of term changes (five) since the week of the election. The above chart shows our diffusion index (blue line) broke above 50 for the first time the week of December 11th since we began tracking the data the week of October 23rd. During this time, we saw many SPACs coincidentally rise above their cash in trust amount, suggesting greater risk-appetite from investors, and confirmed by the rise in IPO proceeds week-over-week.

At this point it is too early to tell if our diffusion index will be dubbed a leading indicator, but at the very least it can serve as a coincident barometer for SPAC teams, allocators and bankers looking to gauge risk appetite. And for those writing their year-end letters to clients, we hope the graphic helps put pen to paper.

We plan to publish the above chart every week going forward on the SPAC Statistics page.