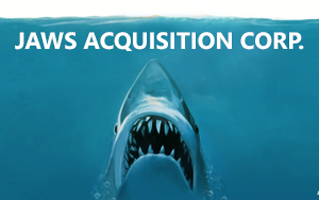 Jaws Acquisition Corp., the debut SPAC from Barry Sternlicht, filed to IPO last night, signaling to everyone that we’re going to need a bigger boat.  As has been the trend, this is another SPAC with mass, weighing in at $400 million, but there is always the potential for an upsize and a full over-allotment. As stated previously, it’s “big-game” hunting season.

As for the name “Jaws”, Jaws Estates Capital is the family office of Barry Sternlicht, which will be the sponsor of this SPAC. And while I don’t know the history of the family office name (and couldn’t find it on the internet), and maybe it has nothing to do with sharks, but calling this deal “Jaws” Acquisition Corp. is frankly, one of the more perfect names for a SPAC in recent history.  It’s memorable, it’s fun and good for branding.

In regards to target focus, Jaws will be looking in the catch-all sector of “leading, growth-oriented companies across a variety of industries“, however, it specifically states it will not be competing with Starwood Capital, the $60 billion private investment firm founded by Mr. Sternlicht.  So that rules out real estate, lodging, oil and gas and energy infrastructure.  However, the prospectus does seem to place particular emphasis on Mr. Sternlicht’s expertise in the consumer sector, so perhaps that will be an area of interest going forward.

Looking at the entire team, Mr. Sternlicht will hold the role of Chairman, but will be joined by Joseph Dowling, as CEO. Mr. Dowling currently serves as the CEO of Brown University’s $4.1 billon endowment after serving as Chief Investment Officer from 2013 to 2018. Additionally, Michael Racich, who is currently the CFO of Jaws Estates Capital, will also be CFO of the SPAC, and Douglas Ostrover, the co-founder of Owl Rock Capital Partners, is a Director.

So what about the terms….well, Jaws will be a 24 month SPAC, with a 1/3 warrant included in its unit.  The 1/3 warrant is not so surprising in the current environment, but what IS surprising is that if you look at the DRS (Draft Registration Statement), which was filed on February 5th, it has always intended to go out with a 1/3 warrant.  If you recall, back in early February, which was long before the Covid crisis, high-profile SPAC teams, like Gores IV, Churchill III, were filing with 1/4 warrants on the regular.  However, since this team does not yet have SPAC experience under their belt, they were prudent in filing with a 1/3 warrant.  Even with the Sternlicht name, trying for a 1/4 warrant would have been challenging.

However, this SPAC does have another “elite-team” bell and whistle.  They have included the warrant call for shares at $10.00, that is typical of the A++ teams that can command it.  Finally, Jaws has also included the Crescent Term at $9.20, to boot.

In summary, this deal appears to have come out with terms perfectly suited for the team and the current climate.  The Sternlicht name alone means this will sell, so an upsize is absolutely on the table IF they want to go even bigger.  Look for this big fish to make a splash the week of May 11th.