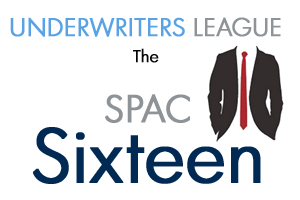 We have a pretty decent match going on between BofA and Chardan.  Chardan took the lead this morning, but BofA came back and is now leading 57% to 43%.  Is Chardan the Cinderella Story of this Tournament? There’s still time to cast your vote….

In other surprising news, B. Riley is handily beating J.P. Morgan right now with 60% of the votes to JPM’s 40%. (Although maybe not so surprising since B. Riley has been on more recent SPAC transactions than JPM)

Credit Suisse and EarlyBirdCapital have commanding leads with both rounding up 100% of the votes cast in their favor, while Deutsche Bank, Cantor and Goldman Sachs all look likely to win their matches.